Paragon Interface, part of the Paragon group, continues to rack up leading awards for its work on 1 Discovery Place for client Discovery and developers Growthpoint Properties and Zenprop. The latest accolade is a 2020 German Design Award in the category Excellent Architecture – Interior Architecture.

The German Design Awards is one of the most renowned design competitions worldwide, and enjoys an excellent reputation far beyond its circle of experts. Those who beat out the high-calibre competitors have successfully proven that they are among the best, according to the German Design Council (GDC). Established in 1953, the GDC’s main aim is to observe, analyse, and evaluate what is happening in design globally. 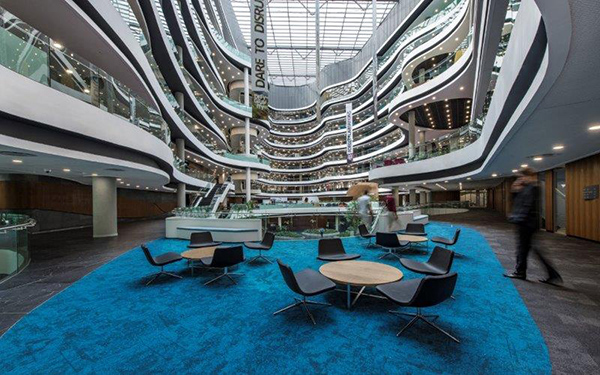 “Each year’s winners not only exemplify the economic and cultural value of outstanding design, but also give a sense of direction, and are representative of current themes and trends,” according to GDC CEO Andrej Kupetz. The German Design Awards have three main categories, namely Excellent Product Design, Excellent Communications Design, and Excellent Architecture.

A total of 5 300 entries were received from 69 countries. The 2020 winners were awarded their prizes at an official ceremony at the opening of the Ambiente Trade Show in Frankfurt am Main on Friday 7 February, which was attended by Paragon Interface Director Claire D’Adorante.

The German Design Awards jury stated about 1 Discovery Place: “The colourful interior design emphasises the open character of the office. It is an interesting approach to design that differentiates individual areas, while still allowing the interior space as a whole to be perceived as a coherent entity.” It has become one of the most progressive and integrated lifestyle and wellness-focused workspaces in South Africa.

As an agile working environment, the spaces never feel crowded, and allow for staff to have various worksettings, depending on their task. There are public spaces across the ground floor, centralised meeting rooms, and numerous retail outlets and coffee shops throughout the large volumes, which still retain an intimate scale around its workspaces.

Paragon Interface also took into account the acoustics in the office areas and across the general floor space. This involved the use of Class A ceiling tiles, furnishings, and ensuring soft edges to the atria by using foliage. A trellis wall of greenery provides an abundant backdrop to the main reception, incorporating the Discovery logo itself, thereby linking the brand with the overarching concept of wellness.

D’Adorante explains that Paragon Interface was informed by the German Design Awards about the nomination in mid-2019, with the winners announced officially towards the end of the year. “You just have to look at what else was nominated, and what we were up against, to appreciate the significance of this accolade.”

She adds that not only has 1 Discovery Place struck a chord on an international design level, it is also testament to the depth of talent and creativity in the South African interior design industry. “The general impression is that we do not have the skills to compete on this level, but this recognition speaks otherwise.”

D’Adorante highlights that what impressed the German Design Awards judges the most about 1 Discovery Place was the striking central atrium, with its activated collaborative workspaces. This was on a size and scale rarely seen on an international level, where Greenfield building projects are severely constrained due to space availability.

In October 2018, 1 Discovery Place was declared Office Design Winner at the prestigious Society of British and International Interior Design (SBID) International Design Awards 2018, held at the Dorchester Hotel in London in the UK.